Hi! This is truly a tale that needs to be shared with all. We, Bengalis, are world famous for our fish recipes. “Mache Bhate” (Fish & Rice) is a phrase that describes us the best! In modern times, however, our palate has gone beyond the borders and we are no more stuck to the traditional fishes of Bengal.  In this list, you will not only find the traditional Bengali fish list, but, fish and seafood used in International cuisine as well, from squid to salmon and much more. So, let the adventure begin…. 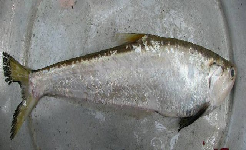 Commonly called Phasa (ফ্যাঁসা), it is a freshwater fish but is presumed to tolerate a little salinity of water. It is basically found in Ganges system and in the rivers and estuaries of Orissa.

It is commonly known as Bhetki (ভেটকী). The fish is a fresh water fish that has a mild flavour and flaky flesh. The flesh is white in colour and is used in various cuisines apart from Bengali cuisine like Thai and Goan cuisines.

It is called Rui (রুই) in Bengali, and is a freshwater fish. It is mainly found in the rivers of Asia. It is widely used dishes of Bangladesh, Sri Lanka as well as the Indian states of Assam, Bihar, Odisha, Tripura, Uttar Pradesh and West Bengal. 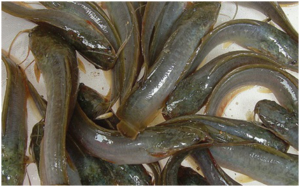 It is called Shingi (শিঙি /শিঙ্গঘি) in Bengali. This is basically a freshwater fish, but can tolerate slightly brackish water. It is used in cuisines of India, Bangladesh, Sri Lanka, Nepal, Thailand, Myanmar and many other Asian countries. 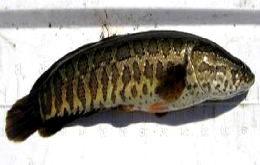 This fish is commonly known as Shol (শৌল / শোল) in Bengali, and is a freshwater fish. The fish majorly exists in freshwater sources like rivers and lakes. This fish is majorly used in the cuisines of various South-Asian countries like India, Bangladesh and Sri Lanka to name some.

It is called by the name Bacha (বাচা) in Bengali. A freshwater fish that is native to India, Nepal, Bhutan, and Bangladesh. Bengal cuisine has many mouth-watering dishes using this beautiful fish. 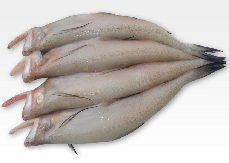 This fish is a common delicacy in various parts of India. It is commonly known as Loytta (লইট্যা) in Bengali. It is a saltwater fish that is mainly found on the western coast of India. Its name was derived from the train that transported the fish “Bombay Mail” or “Bombay Dak” during the British era.  This is how it acquired its name that later transformed from Bombay “Dak” to Bombay “Duck”. Though the fish might have a stinking smell but once cooked properly with the amazing ingredients, it tastes scrumptious.

It is quite a popular freshwater fish and is called Katla (কাতলা) by Bengalis. It is similar to the rohu in aspects of flavour, but is the texture is flakier than the rohu fish.

Koi (কৈ) is the Bengali name of the Climbing Perch. It gets the name Climbing Perch because it can take in atmospheric oxygen and hold it for sometime giving it the ability to walk on land for small distances, to find another water body.

Reba Carp also known as Bata (বাটা) among Bengalis is a small to medium fish. It is mainly found in large streams, tanks, rivers, lakes and reservoirs of Bangladesh, India and Nepal to name some countries making it a freshwater fish.

It is another fish that belongs to the family of Catfish is more commonly called Magur (মাগুর). Being from the family of Catfish they too have the ability to breathe on land so that they could walk on land to find better environments where they could thrive. Magur fish is usually found in slow-moving and stagnant water bodies like ponds and swamps or in rivers and streams. They can also be found in rice paddies that have been flooded or temporary pools that might dry up during the summers. When their habitat dries up, they can take help of their “walking” skills to move to other habitable water bodies. 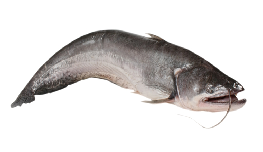 Boaal (বোয়াল) is the name by which most Bengalis relate to this kind of freshwater fish. They are largely distributed over the rivers of Sothern and South-Eastern Asia. The fish itself has little bones and no scales. Curries and broths can be made using the fish. 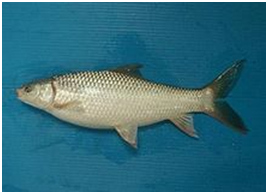 Mrigel (মৃগেল, মিরগেল) is the Bengali name of the White Carp which is a freshwater fish. It is considered to be a delicacy in West Bengal and is quite a tasty fish.

Aar (আড়) is another fish that belongs to the family of Catfish and thrives in freshwater. It has a mild sweet taste with a fleshy texture and very little bones. 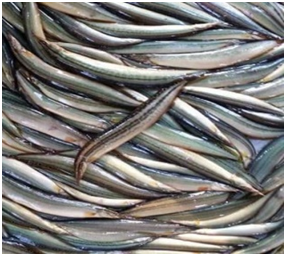 Baan or Pakal (বানমাছ/ পাঁকাল) is a freshwater fish that is common to many Bengali households. It can feature in a range of curry based dishes, from jhols (soupy broth) to jhals (spicy curries)! 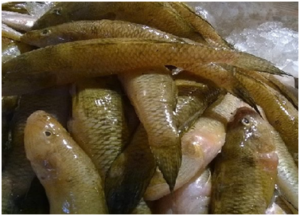 Bele (বেলে) is a freshwater fish that is common to streams and brackish estuaries. It is a common Bengali fish, which is popular to spicy dishes. 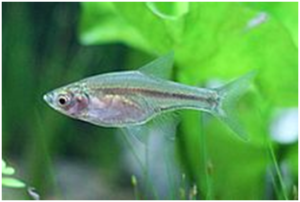 Chuno/ Mourala  (চুনো/ মৌরলা) is a small freshwater fish that is commonly prepared in Bengali households. The fish might look small, but it has numerous health benefits, because of its high nutritional value! Small fish are known to be good for the eyes, as well. Fry it or prepare a spicy gravy based dish, to enjoy the taste and health benefits.

Pabda (পাবদা) is another freshwater fish, which Bengalis absolutely love. It can either be small enough to be prepared as a whole fish, or just big enough to be cut in half for preparation, but no bigger than that. If, you want to enjoy its sweet  and fresh taste, make sure you have the right size.

Parshe (পারশে) is a small to medium fish, which Bengalis love to have as a whole. Parshe is another freshwater fish, which is sweet to taste. The commonly prepared recipes include jhols (a soupy broth) and sorsher jhal (gravy with mustard paste). 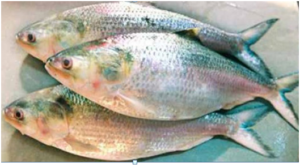 This is a no brainer! Bengali and Ilish (ইলিশ) are synonymous with one another. As soon as Bengalis get a whiff of the rains, ilish becomes a regular in their households. It is basically a seawater fish, but, it is when they enter the freshwater streams that it becomes the tasty fish, you have heard about! 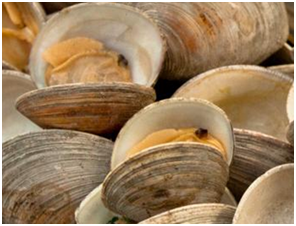 Clams have been a part of Bengali cuisine for ages, it is known as geri-gugli! Nowadays, it has risen from being considered unpalatable to many and earned its spot as a delicacy. The traditional Bengali dishes include curries and gravy based dishes. On the International front, however, it can be smoked and cooked. A popular dish is Clam Chowder! 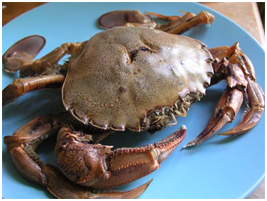 কাঁকড়া or crab is a crustacean and a delicacy, which is common to many cuisines around the world!  From the crab bisque of French cuisine to kakrar (crab) jhal in Bengali cuisine, crab meat can be used in various ways to create mouth-watering dishes. 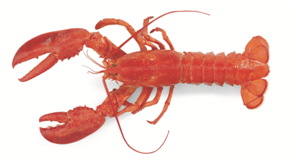 This is another crustacean delicacy loved by people around the world. It might not be a well-known delicacy for Indians, but the globalization of culinary world has made it popular in India as well. Lobster can be used in a variety of dishes, from simple bisque to lip-smacking Lobster Thermidor! 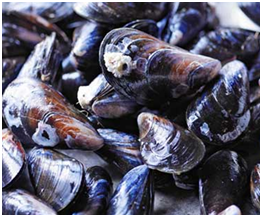 This also has place in Bengali cuisine and is another form of geri-gugli, but more common to the southern and western part of India! Apart from Indian cuisine, this mollusc has found popularity in European cuisine and even, Cantonese cuisine. 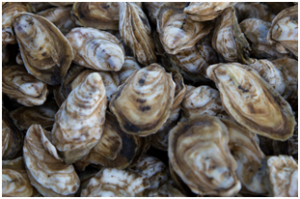 Oyster is a delicacy loved by all! But, did you know that it was a treasure trove of nutrients? They are low in food energy, but high in protein. A fun fact about oysters is that it is considered to be an aphrodisiac! You can either cook them or just enjoy them (on the ice & fresh) raw, with a little lemon juice. 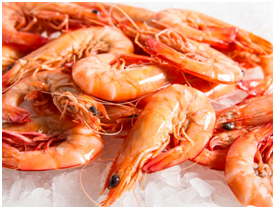 Prawns, also known as চিংড়ি/Chingri in Bengali, are a favourite among many. In Bengali cuisine, one of the most popular dishes is Chingri r malai curry! It features in a number of international cuisines, from the seafood gumbo to prawn cocktails! The smaller version is also known as shrimp. 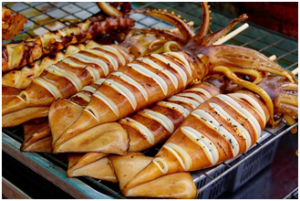 The culinary name for squid is calamari! It is not so common in Indian cuisine, but across the world, from America to Japan, squid is considered to be a delicacy. The most popular dish made with squids is the humble crumb fried calamari rings served with tartar sauce on the side. 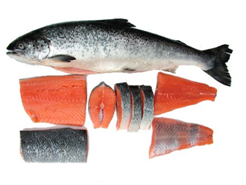 Salmon belongs to the family of trout and char. It is basically a freshwater fish, which does migrate to the sea, but, always return back to its origins. Salmon is known to have various health benefits, due to its high content of omega-3 fatty acids and Vitamin D. Colour of the flesh varies from orange to red, which adds great colour to the dish!

It is basically a family of fish that mostly thrive in seawater! Red Snapper is one of the most popular fish in this family that is considered a delicacy. It goes great when served with a side of flavoured rice, like herbed rice or lemon butter rice.

Tuna is a saltwater fish, which is often called the chicken of the sea! It is a delicacy in many cuisines. Tuna has a delicious taste and is often, served after lightly frying with a crust of sesame seeds on the outside. It is a great source of omega-3 fatty acids and thus, has numerous health benefits. Canned tuna is also available at your local supermarket, but, nothing compares to the taste of fresh tuna! 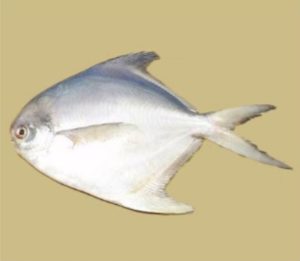 Pomfret (পমফ্রেট) is a marine fish that commonly features in many Bengali household menus. The simplicity of the fish lies in the fact that it tastes delicious, even if you just fry it with some salt and turmeric. It is known to be beneficial for your heart, joints and eyes.

Olive barb is known as Sarpunti/ Saralpunti(সরপুঁটি/সরলপুঁটি) in Bengali. It is a small fish that thrives in freshwater. The really tasty ones are not more than 15 inches. This fish comes with its fair share of health benefits, which is due to its high contents of nutrients. Olive barb is native to Nepal, India, Afghanistan, Sri Lanka, Bhutan, Pakistan and Bangladesh.

Topshe (তপসে/ তপস্বী) is the Bengali name for the Mango fish. It is basically a freshwater fish that Bengalis absolutely love. Topshe Fry is a must try for everyone. It is basically the Bengali version of fish n chips. It even features in many special occasion and marriage menus.

Tyangra (টেংরা) is another delicacy from the kitchen of the “Mache Bhate Bangali” (Fish and Rice loving Bengalis). You can fry it and prepare a jhal (spicy curry) or jhol (a soupy broth). It is a freshwater fish and the smaller or medium sized fish have the best taste. 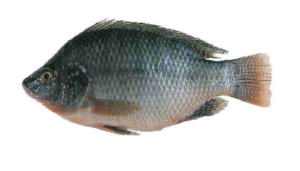 Tilapia (তেলাপিয়া) is the Bengali equivalent of Tuna. The reason for that is the fact that it tastes a bit like chicken. A freshwater fish, tilapia lives in shallow streams, rivers, ponds and other freshwater sources. It has a unique musty flavour, which many might even say muddy, but do not let that throw you off. Low mercury content, and high contents of nutrients like potassium and phosphorus, makes the fish a healthy option for all. 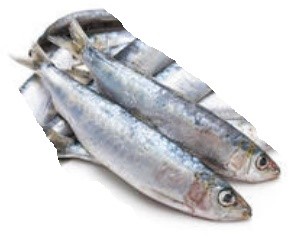 Khoyra (খয়রা) is a well-known fish on an international scale; however, it is popular by another name! The sardines! It is a favourite in various states of India, including Kerala, Andhra Pradesh, Karnataka and West Bengal. Unlike sardines, this fish is also found in streams or lightly brackish water along the coasts. 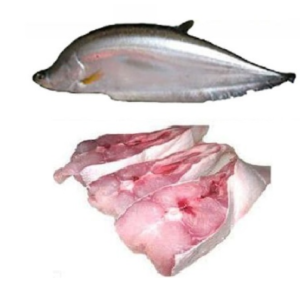 Chitol (চিতল) is the Bengali name for this fish and have been reported to grow up to 6 feet in length. The fish usually inhabits fresh water bodies like lake, streams and rivers. A prominent dish prepared with chittol mach is the Chittol Macher Muithah. If, you ever visit Bengal, it is one of those must-have dishes!