How to do a basic table setting

To lay the table in a basic setting remember to keep the Fork first, then the plate, in the right side will come the knife and then the spoon.

Also note that – The Knife blade should face the plate

Knife and the bread butter plates are optional 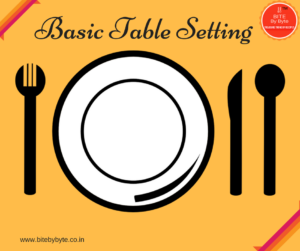 For an almost casual & informal menu consisting of three courses, this is how the table is laid –

Dinner Plate – It is the most important thing. Usually napkin is placed on this.

The Two Forks: There are 2 kinds of forks. The bigger fork, ie the Dinner fork is kept along the left hand side of the plate. The fork which is smaller is used for eating salads etc. It is placed to the rigT of the bigger fork.

Napkin: The Napkins are often kept in napkin holders. However these are mostly kept on the dinner plate or sometimes under the forks.

Dinner knife: Dinner knife is usually placed on the right hand side of the table and its blade or sharp side should face the plate. In case of steak being served, a steak knife could be used. 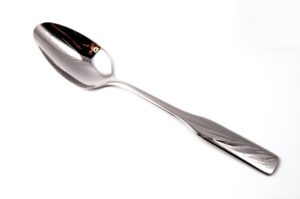 Glasses: The drinking glasses are generally kept on the top right hand corner of the dinner plates.

Salad plate: A separate salad plate is a good idea in case it is runny. Thus this is kept at the left hand side of the forks. 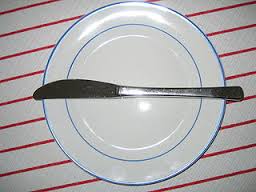 Bread plate along with a butter knife: The bread plate is placed above the placement of the forks, with the butter knife being placed in a diagonal manner across the plate’s edge. The handle should be on the right side while the blade should be facing down.

Spoon & Fork for Dessert: The Dessert Spoon & fork could be placed above the dinner plate horizontally or beside the plate. If you want to put it beside the dinner plate, then it needs to be put on the left side, as it will be the last fork which was going to be used. The spoon in the similar manner will be put to the right side. 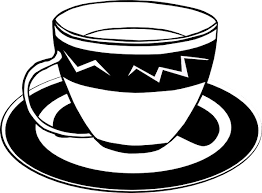 Cup & Saucer for Coffee – If coffee is served post dinner, then the cup & saucer should be kept to the right side of the knife and the spoon.

If its served at home, then the cups & saucers are brought to the table and then served.

The thumb rule for formal place setting is when things can be spaced in a geometrically manner. The centerpiece should be kept at the center with all the settings being made at an exact equal distance. You can keep the floral arrangements and other center pieces varied. 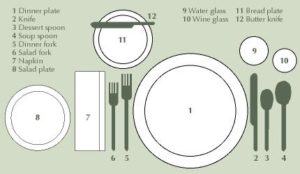 The setting described below is for a menu that includes:

Service Plate: It is nothing but a big plate which is kept under the plate on which first course can be kept. It is also known as the charger.

Service plate remains on the table after the completion of first course. It remains there until the arrival of the entrée, when the dishes are exchanged.

This service plate can be used for many courses.

Butter plate: Butter plates are kept at the table above the placement of forks. It’s thus kept on the left side.

Dinner fork: This fork is also called Place fork. It is the largest fork and is placed towards the left side of dinner plate. The other forks which may be needed for other courses are generally kept to the left hand or the right hand side of the dinner fork.

Fish fork: fish knife is kept towards the dinner knife’s right hand side

Salad fork: After the entrée if a salad is to be served, a small fork called the salad fork is positioned next to the plate, on the right side of the dinner fork. If salad is served before the fish course, then forks would have been arranged in the following order, from left side to right side: salad fork then fish fork, and finally dinner fork.

Dinner knife: On the right side of the dinner plate, the large dinner knife can be placed.

Fish knife: Fish knife that has a special shape and is placed on the right side of the dinner knife.

Salad knife: In case a salad is served first followed by the fish course, then the arrangement of knives would as follows (left side to right side): dinner knife then fish knife followed by salad knife.

Soup spoon or fruit spoon: When fruit or soup is served as the first course, the designated spoon should be placed on right side of all the knives.

Butter knife: It is a small spreader that is placed diagonally over the top of the butter plate, with the handle being on the right side while the blade placed in a downward fashion.

Glasses: the number of glasses can go up to 5. There placement is such that all the smaller glasses can be placed in the front. Water goblets are arranged above the placement of the knives. On the right is the champagne flute; in front of which a red and/or white wine glass as well as a sherry glass can be placed.

Napkin: The placement of the napkin is always on the top of the service plate (provided one is being used). In absence of a charger, it is placed in the space of the plate.

Knife blades need to be placed with the cutting edge facing towards the plate.

Not more than three of the implements can be placed on the table, except for the occasion that an oyster fork is being used along with the other three forks.

In case there are more than three courses before dessert, then the utensil for the fourth course is always brought in along with the food; likewise the salad fork and knife may be brought in when the salad course is served.

The dessert forks and spoons can be brought in placed on the dessert plate before the serving of the dessert.

Place used utensils on your finished plate parallel with each other at the four o’clock to ten o’clock position. Any utensils necessary for dessert will arrive with the dish when served.

If a knife is used to cut food into smaller pieces, cut only one or two bites at a time.

If you need to step away during a meal, fold your napkin informally and place it to the left of your place setting. Alternatively, you may place the napkin on your chair, but not if the napkin is soiled.

“Keep your elbows off the table!” “Sit up straight!” Your mother was right!

When in doubt, follow the lead of your host and hostess.

How to use Cutlery?

POSITION OF CUTLERY WHILE EATING

Tips for the Meal Time

The basic table etiquette should be maintained as that ensures the comfort of both guests and host when seated at the table. The knowledge of table manners is just a matter of having basic common sense. Whether you are at a formal dinner or enjoying a night of poker with your friends, your table manners will help you to get through the situation.

Q: What should I do if I spill something?

A: A minor accident at the table is bound to happen on occasion. If you are the cause make your excuse politely and only once, then proceed to help the host to clean up the mess. If your guest makes an inadvertent move that sends pudding onto his neighbor’s lap, attempt to make everyone feel at ease with the situation. Accept excuses, clean up the mess with minimal fuss.

Hot foods can create embarrassing situations. When confronted with hot foods, first be wary. If you do make the mistake of scooping up a mouthful of scalding casserole, then make the minimal fuss by swiftly taking a drink of water or some other cool beverage.